Not a proverb you’d have heard of but it’s one that suits this jotting.

If you’ve read any of my musings before now, you’ll know that most of the pieces I produce are knitted flat.  I’ve eschewed the Magic Loop and the dreaded sets of four or five dpns for years now after one disastrous attempt with four needles when my fingers jerked uncontrollably, needles slipped to the floor and stitches twisted upon themselves.  I couldn’t see the attraction or the point of fiddling with more than two needles.  Until the other day.  My toad-loving friend’s birthday was coming up and I really wanted to knit a toad (or frog, we’re not fussy) to sit in her hand but dpns came up again, so I settled for a waving frog dishcloth.  The design stood out clearly in green DK cotton.  My job was done.  But…surely I couldn’t be thwarted by five needles.  I’ve just started studying a course in ‘Forensic Archaeology and Anthropology’ with Durham University, for goodness sake.

With that in mind, I tackled a Frog Bath Puppet with five dpns.  A what?  Yes, a bath puppet, designed to attract reluctant children into the bath.  Of course, my friend has passed that phase of her life, and so have her two sons, but I know she’ll be tickled to have this froggy face somewhere in her bathroom. 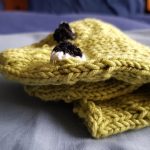 The finished article was satisfactory.  It looks like a frog; it even fit my hand; and because the number of stiches was nine on each of four needles, it wasn’t too fiddly.  By the time I got down to just eight stitches across the four needles, I knew what I was doing.   The pattern even required knitting the eyes and lower jaw with different coloured yarn, and then removing that yarn and picking up the original stitches after the initial puppet was completed.  Oh yes, some new skills tackled and mastered.  Thank you to Briley for a great pattern, which can be found here 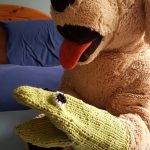 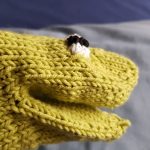 I used DK Cotton yarn rather than worsted weight, and I used size 9 (3.25 mm) dpns as they were the largest I had.  They worked for me.